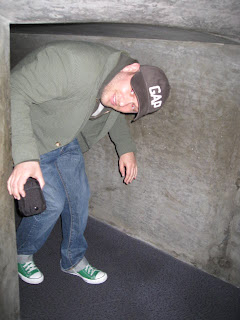 I did want to take a moment and acknowledge that this week marks the one year anniversary of Just Jon the blog.
Thank you to all the Loyal Readers who have continued to come back and read my ramblings.
Thank you to the non-Loyal Readers from around the world who can't spell the word "Manicotti" and were inadvertently directed to my site.  In the five months since Just Jon began tracking visitors, 345 people have misspelled the word "Manicotti" in their search causing them to visit Just Jon.
On a side note, in those same five months Just Jon has been visited by people in 19 different countries/territories!
Thank you to everyone who has left comments, I appreciate the fact that you take the time to share your thoughts about what I have written.
Finally, a special shout out goes to the Loyal Readers who have made purchases from the Just Jon Store. (Don't tell anyone, but it was actually just one Loyal Reader who also happens to be my Mom.)
The Song Of The Day - Thank You (The Moog Flava Mix) by Boyz II Men
Posted by Just Jon at 11:43 PM

Email ThisBlogThis!Share to TwitterShare to FacebookShare to Pinterest
Tag: Anniversary