So if you didn't figure it out in the last post Loyal Readers; Surprise!  I am blogging to you from the beautiful Island Hawaii!

That's right my friends, I am on vacation and could not be more excited to start my time away from the City by the Bay on The Garden Island of Kauai.

This is my first trip to Kauai and let me tell you how happy I was when I buckled my seat belt on the plane and discovered that the two seats next to me were empty!  Five hours on a plane with a whole row to myself?  Yes please!

The Advil PM I took quickly kicked in and when I awoke to the shriek of a child several rows back I discovered that my row had been invaded by a man who decided he did not want to sit next to his wife for five hours.  At least I still had one seat next to me that was still empty.

I closed my eyes and drifted back to sleep and missed two passes of the drink cart but was pleased when I awoke just in time for Alaska Airlines' third pass which included a complimentary Mai Thai!  Does it get any better than this?

Well, not so fast, with about an hour left of the flight the stewardess came on the loud speaker to inform us that "we had used a lot of water on this flight and there was no more water for the sinks in the bathroom."  Can we say EWW! 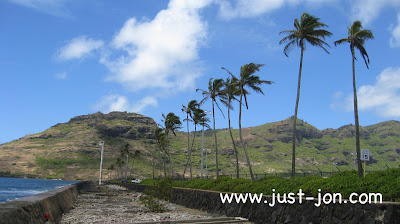 After we landed I had a little over two hours to kill in the Lihue Airport before for my partners in crime (a.k.a. Just Mom and Just Dad) arrived from Los Angeles.

I did not realize just how small the Lihue Airport was and while the plan was to get something to eat while I waited, I stepped through one to many doors and found myself beyond the point of no return.  I was in baggage claim and there were no food vending machines and all "restaurants" were "inside" the airport "terminal" which I was now not allowed back into.

I talked to two airport employees who first confirmed that there are no food vending machines in any of the baggage claim areas and whose best suggestion was for me was to catch the "Marriott" shuttle bus and get something to eat there.

I pouted for about thirty minutes on a bench outside the baggage claim while three chickens seemed to mock my hunger by eating pieces of candy left on the ground.  Then divine intervention struck... I decided I should go pick up the rental car so that when Just Mom and Just Dad arrived we could head straight to the nearest restaurant and chow down.  Brilliant!

I got the rental car and scoped out the area for a place to eat.  Then went back to the airport just in time to pick up the parents. 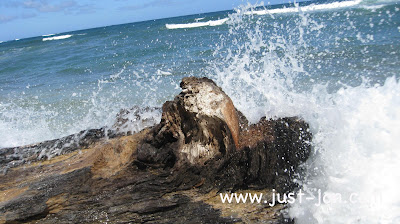 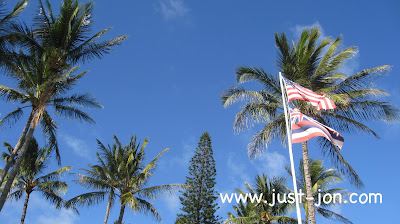