Everybody Loves A Laughing Place . . . 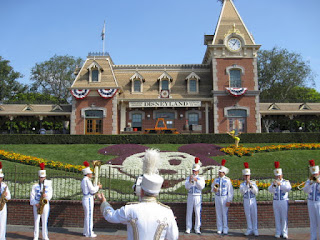 Over Labor Day Weekend I went home to LA.   On Sunday my parents and I went to Disneyland.  My parents had not been to Disneyland in 19 years!  (We are not counting the trip to Disney World I made them go on four years ago, because that is an experience in and of itself that can not be compared to the original in Anaheim.)
I opted to be the driver on the trip partially because I knew it had changed a lot in the area around the park and partially because I don't get to drive much anymore.  This may have been a good thing because we encountered two minor detours along the way.  First, there was an accident on the freeway that blocked all lanes of traffic and we were re-routed into East LA.  Not the greatest of areas to be re-routed.  My keen sense of direction (more like blind luck) got us back on the freeway and heading toward Disneyland in what was probably less than ten minutes.  Our second detour occurred when we got off the freeway at Disneyland and some of the streets were closed for a marathon.  Fortunately it all worked out and we eventually arrived at the parking structure. 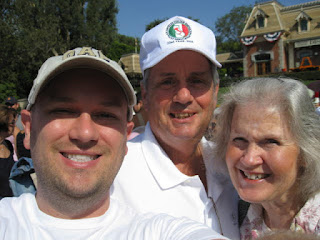 Here is Dad, Mom and myself at the park entrance.  It was a coin toss as to whether we would go to California Adventure or Disneyland.  At the last minute I chose Disneyland.
Despite being a holiday weekend it turned out to be a great day to go.  The park was not very crowded.  The longest we waited for a ride was a little over an hour.  And that was for the "New" Finding Nemo Submarine ride.  All the other rides averaged about twenty minutes which is really good!  We did all the major rides and didn't even stay past 9 pm. 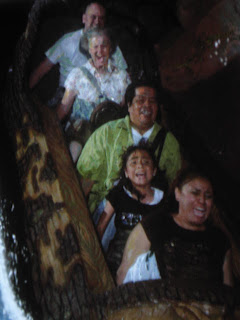 Here's Mom and I on Splash Mountain.   We got pretty wet on that one! 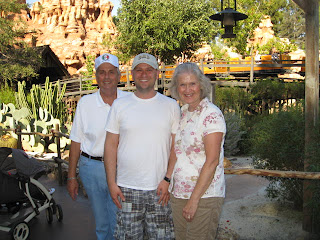 Thanks to the kind stranger who offered to take our picture in front of Big Thunder Mountain.  Unfortunately, I guess she didn't hear me when I asked, "Can you please be sure to get the Mountain in the background?"
The Song Of The Day - Walt Disney Medley by The Walt Disney World Band
Posted by Just Jon at 7:01 PM

Claim To Fame on ABC & HULU

Just Another Dream (7" US Mix) by Cathy Dennis