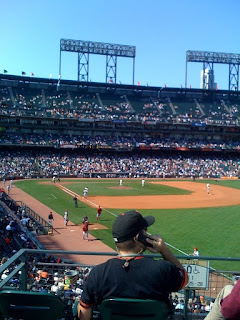 This past Wednesday I won tickets at work to go to a Giants game.  I had the option of picking any game in September.  So I picked an afternoon game.  The prize included four tickets in the club level behind the first base line and a parking pass.
Since our office is only about a ten minute walk from the ballpark we didn't use the parking pass.  It was nice to take an afternoon off to enjoy a game.
The surprising part is that the Giants actually won!  Even they looked surprised when in the bottom of the ninth with two strikes the batter was able two drive the ball just out of reach of the Diamond Backs for the win.  They came out on the field jumping up and down holding each other like it was the World Series.  Go Giants.
As you can see from the above picture our team is so good we totally filled...half the stadium.
The Song Of the Day - Winner Of The Game by David Guetta and JD Davis
Posted by Just Jon at 8:32 AM