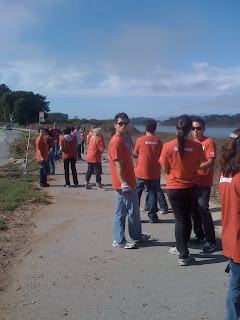 OK everybody, today was the annual Gap Day In Action where everyone at the office spends the afternoon volunteering at one of several pre-determined events.  We all throw on our Gap Inc Volunteer shirts and prepare to get dirty.
This year my co-workers and I chose the Lake Merced project.  It was listed as "light" to "moderate" physical work.  After last years campaign to "Save The Salmon" in Muir Woods which started off with a treacherous mini bus ride down a winding canyon road that caused almost everyone to get car sick, we then were put on "log removal" for three hours ( who knew I could lift logs with the best of them. )  So this years "light" work seemed just right.
Well, the work wasn't so "light" after all.  First, during event orientation, a bird pooped on one of my co-workers.  Despite the fact that everyone tried to assure her that a bird pooping on you is good luck, I don't think she was having any of it.  I have to give her props because she handled it quite gracefully and I know I would have freaked out!
During orientation we were split into two groups.  I would be part of a group of thirty people that would have to weed what were allegedly radishes and overgrowth from a small area along part of the lake.  The other group of thirty were out on the highway edging the concrete divider. That group got to wear orange safety vests!  Slightly jealous. 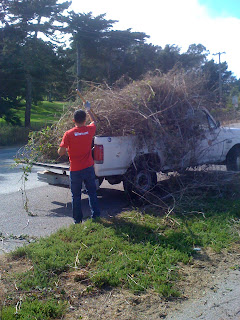 Here is my co-worker Peter helping to load the truck with some of the weeds. 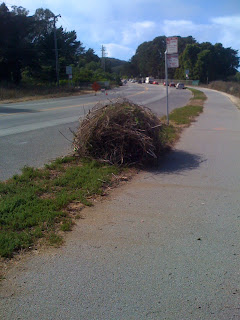 This is the "Weed Roll" that An, Peter and I rolled to the curb to await removal. 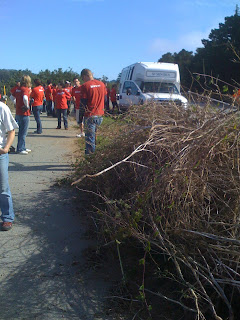 Oh praise Jesus, there is the bus to take us home!
The Song Of The Day - I Like To Move It by Reel to Real featuring the Mad Stuntman
Posted by Just Jon at 8:33 PM