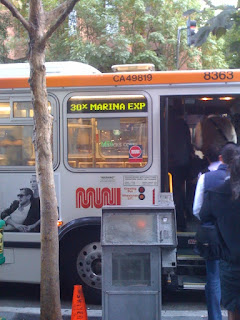 This is the 30x.  I have written about it many times.  Please take notice of the route indicator sign in the window next to the door.  It clearly designates that this bus is the "30x Marina Express".  There are additional route indicators on the front and rear of the bus.
When a bus is not in service it often turns the route indicator signs off or changes them to say "Not In Service."  Because I get on the 30x at its point of origin in the Financial District it is not uncommon for the bus to pull up to the stop with the route indicator turned off.
On one of the days this week the 30x arrived at the point of origin with its route indicator stating "EMERGENCY."  We Marina folk didn't even question it and proceeded to board the bus.  One female passenger approached the driver and asked if he was aware that the route indicator said "emergency."  The driver got off the bus and looked at the sign and then said it was properly programmed on his end and there was nothing he could do.
Now normally, as I have stated in the past, the 30x is usually standing room only.  But this time as the bus worked its way through the Financial District not as many people were getting on.  There were plenty of seats for everyone.  The driver started to yell out at each stop, "the sign is wrong, this is the 30x."  Still people weren't getting on like normal.
I then realized that it was as if people were getting out of the way so to speak so that our "EMERGENCY" bus could get through.  This was fine by me.
Then as we left the Financial District and headed toward the Broadway Tunnel a police officer pulled up beside us to offer assistance.  This was getting good.  We were going to make it home in record time with a police escort.
Again the driver yelled out the window to the police officer, "the sign is broken, everything is OK."
I was happy two fold.  One, I was getting home super fast.  Two, the "EMERGENCY" sign clearly was working.  We had a clearer path and the police came to offer assistance.
Good times!
The Song Of The Day - Home by Marc Broussard
Posted by Just Jon at 8:51 AM