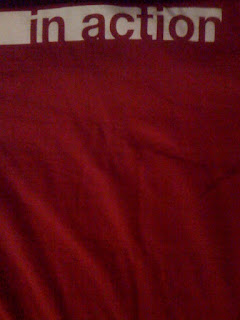 It's that time of year again!
The annual Day In Action where everyone at work puts on their red volunteer shirt and donates an afternoon of their time to one of several predetermined charities in the Bay Area.
This is my fourth Day In Action.
The first year I had the pleasure of going to the Janet Pomeroy Center where we helped to clean up a garden, remove a hillside of leaves, and play an amazing game of basketball with the center participants. The Janet Pomeroy Center "provides recreation and vocational opportunities for people with disabilities."
The second year our team signed up to save the salmon in the Muir Woods. OK, so I didn't actually work in the stream like some of my co-workers. My job was to remove logs from the forest. No joke! You didn't know I was that strong did you? A fun little trivia fact for you Loyal Readers is that the part of the forest that I was removing the logs from is where they filmed Star Wars Return Of The Jedi.
The third year I got to pull weeds at Lake Merced. You can read about that event in the blog entry from last year titled I Like To Move It.
This year I got to participate in a very rewarding project. My co-workers and I volunteered to spend the afternoon on Treasure Island with the students of the Job Corps. The "Job Corps is the nation's largest residential education and vocational training program for the economically disadvantaged youth."
Our project was to work one on one with an individual student to help them with their resume, share with them how to prepare for a job interview, and role play a mock job interview. This was also the only project where we were instructed not to wear our red volunteer shirts as they suggested we dress as if we were going to an actual job interview. This meant my co-workers and I had to dress up more than what we would normally wear to work every day.
I really liked this project because I felt like I could see the positive impact I was having on a person's life.
The young woman I worked with had such a light in her eyes that I hope that the Job Corps will be able to help her in her future path to success.
The Song Of The Day - Don't Stop Believin' by the Glee Cast
Posted by Just Jon at 9:16 PM