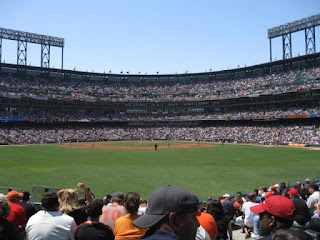 Beautiful day, nothing to do, so why not go to a Giants game? It's never sold out!
The 1:05 pm game had the Giants facing off against the Cincinnati Reds.
After failing to round up any friends for my last minute decision to go to a baseball game, I decided I should just go by myself.
So at noon I boarded the 47 bus and headed down to the ballpark with no ticket. Perhaps my only mistake was wearing a t-shirt that said "Los Angeles." Fortunately the t-shirt is black and I don't think anyone noticed.
I arrived at the stadium at 1pm and the crowds were filtering through the gates.
There actually was a pretty long line to buy tickets.
As I was looking for the end of the line I heard the woman walking next to me calling out,
"Anyone need a single ticket?"
"I do! Where is the seat?"
"It's just the bleachers, and hey it gets you into the park and it's fun out there," she said.
That was fine by me, so I started to pull out my cash, but only had twenties. The ticket price was $25.00.
"Do you have change for a $20?" I asked.
"$20 is fine," she said.
And with that I bypassed the line and walked into the stadium. 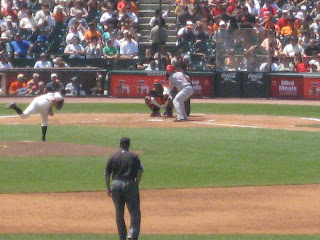 I went straight to the souvenir stand to pick up a new Giants baseball cap. Hopefully that will distract anyone from noticing my "Los Angeles" shirt.
I then got in line for a Giant Dog, some Stadium Nachos, and a water.
My seat was in dead center field with all the people from Virgin America who were being welcomed at the game today.
The Giants won 4 to 2 in the top of the ninth!
The Song Of The Day - Winner Of The Game by David Guetta featuring JD Davis
Posted by Just Jon at 9:07 PM