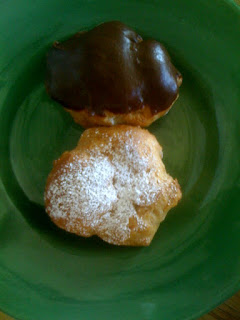 Treats.
In the beginning there was the Sears candy counter. Here one might indulge in a Nonpareil or some Swedish Fish. This begat the Sweet Factory, where individuals could fill their own bags of candy from what seemed like an unending supply of choices. Fill your bag too full and the price based on weight would skyrocket! The Sweet Factory was a virtual Willy Wonka candy emporium!
For beverages it began with the Orange Julius and the Icee. As an adult, the frozen drinks were still desirable so new "grown up" themed ice blended drinks became available. For the health conscious there was Jamba Juice and for the caffeine addicted there was Starbucks.
Originally ice cream came in Baskin-Robbins 31 Flavors. Then the frozen yogurt craze took over and it was all about Penguins. In the years to come instead of crushing brownies on top of your frozen yogurt you were mixing in Fruity Pebbles or Mochi at places like Pinkberry or YoCup. Not to be outdone the Cold Stone Creamery arrived on the scene with unique flavors and the opportunity for patrons to mix candy into their ice cream.
The first giant cookie I remember came from the Great American Cookie Company. In the years that followed every mall had a Mrs. Fields where one would find Debra's seasonal special.
Honorable mention goes to those deliciously aromatic calorie filled Cinnamon rolls available at Cinnabon. They held their dominance in the mall dessert field until people realized just how bad they were for you.
Clearly over time what is considered a popular treat has evolved. In the last decade the dessert du jour has been the Cupcake. Here in San Francisco there are cross town rivals Kara's Cupcakes and That Takes The Cake. Those two businesses however are no where near as famous as Sprinkles Cupcakes.
But has the cupcake's time in the spotlight come to an end? If it has, what possibly could take its place?
One might argue that the cream puff is leveraging a power play for next world dominance in the dessert industry.
In the Bay Area, most people are aware of Beard Papa's cream puffs. This treat is an import from Japan. Beard Papa's locations tend to have lines down the block.
This month a new cream puff store opened on Union Street. Pacific Puffs offers homemade small batch cream puffs from a family recipe. The shop was launched by two brothers. Samples of their offerings are pictured above.
I tried the traditional vanilla cream with chocolate frosting and a chocolate cream with powdered sugar. I enjoyed both.
Was it better that Beard Papa's?
I think the filling was a little denser and I liked that.
Here is my concern.
Beard Papa's has a more diversified menu that includes Cheesecake sticks, Fondant Au Chocolate, and Mochi Ice Cream. Pacific Puffs currently only sells cream puffs in about five choices. Pacific Puffs also has the cupcake competition of That Takes The Cake just down the block. Not to mention two businesses offering frozen yogurt across the street.
While I enjoyed trying the cream puffs, I think Pacific Puffs is going to need to diversify its menu if it is going to survive as a stand alone store front.
That being said, best of luck to the cream puff as you try to take America by storm!
That Song Of The Day - Sugar Is Sweet by The Party
Posted by Just Jon at 7:24 PM