I have so much vacation time built up at work I decided to take Friday off and enjoy a day in the City. As I thought about what I might want to do I decided that I would check out the infamous Lyon Street Stairs.
I have heard about the Lyon Street Stairs for three years and have always wanted to attempt to make the climb to the top. So at 11am I left the comforts of my apartment and started walking. 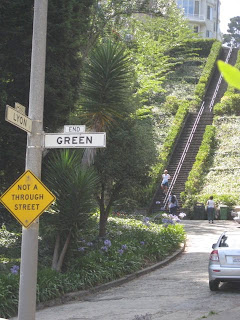 I headed down Chestnut Street until I reached Lyon where I made a right hand turn to head toward the stairs. I had a slight headache so I was worried about whether I would be able to complete the climb with my head throbbing. But, my three year desire to see these stairs pushed me forward.
And there they rose out from the slight incline at the end of the street. It was now or never. I could see there were true athletes who were jogging up and down these steps. That was not going to be me. I was going to take it one step at a time with frequent stops for pictures. 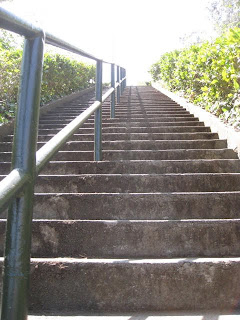 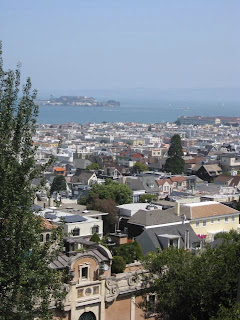 Woo Hoo! I made it to the first landing! What a great view of the Bay and the Marina. 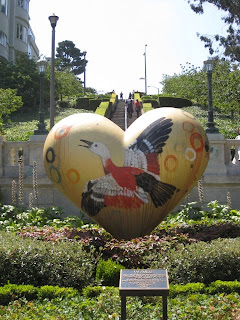 At the next landing was one of the many Heart sculptures that are scattered across the City. 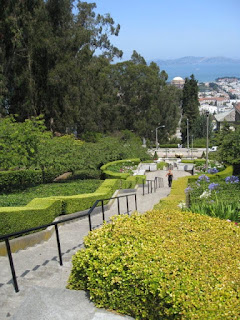 Up more steps I climbed. 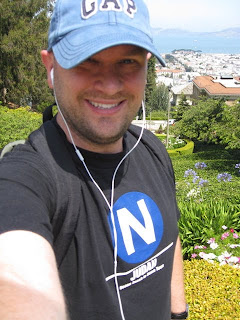 And then I reached the top!
Hey, I think my headache is going away!
Now that I had reached the top I hadn't really thought about where I wanted to go next. I saw there was a gate into the Presidio off to the right so I decided to see where it lead to. 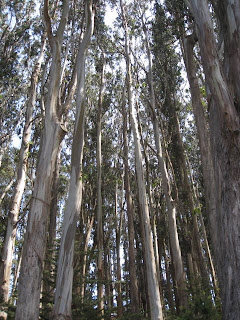 It lead to trees.
On the path I went until I eventually arrived at this sign that informed me I was on "Lovers Lane." This path had been used since the late 1800's for soldiers to travel from the Presidio into San Francisco. That was then. 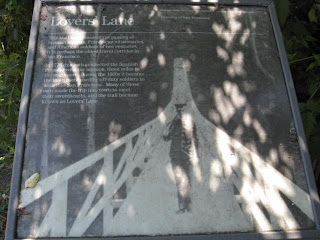 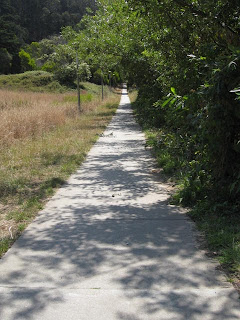 I might as well keep going right?
So on I went. Through the Presidio. Past the bowling alley. Past the future Walt Disney Museum. One step at a time. 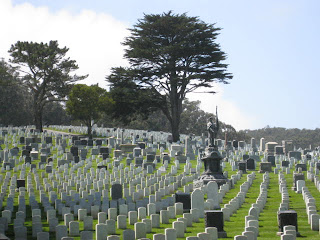 Past the cemetery. Past the horse stables. On towards the Golden Gate Bridge.
Then I saw a sign that said "Scenic Route and Log Cabin."
Log Cabin? That's where I am going to go! 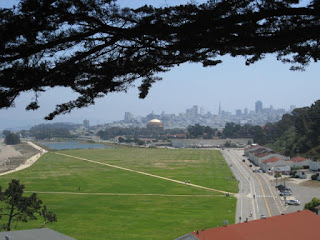 I stayed on the road hoping I was heading in the right direction to get to this Log Cabin. All the while stopping to take pictures for tourists who wanted to have a snap shot of themselves with the Bay in the background.
I started to think I had made a wrong turn so I stopped twice to ask workers if I still heading toward the Log Cabin.
Both times the workers said, "Yes, it's just around the curve."
I felt like I had been heading around this curve for a really long time. 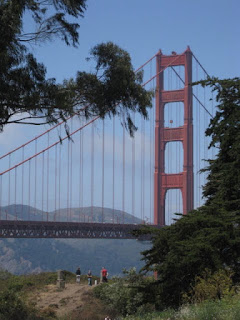 I mean I had now reached the Golden Gate Bridge and there was still no Log Cabin. But I trusted the workers and kept going. 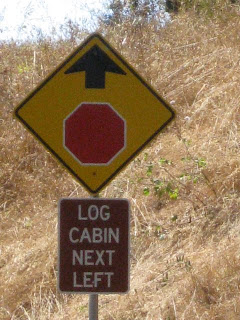 Oh thank God!
Just past the Golden Gate Bridge I came upon this sign.
"Log Cabin Next Left."
I got to the intersection and turned left. I didn't see any Log Cabin. But I kept walking.
Then just beyond the trees I saw it! The Log Cabin. 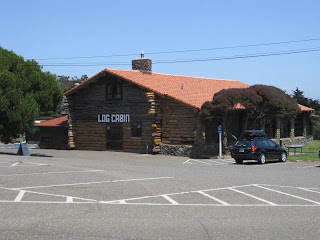 And the Log Cabin, yeah, it was not what I was expecting. It was just a hall you can rent for wedding receptions or parties. I thought it was going to be a museum or something. I was a little disappointed. I mean I was a lot disappointed.
And the worst part, now I had to walk home.
I was also really hungry so I headed back towards Chestnut Street for a late lunch at the Squat and Gobble.
Four and a half hours after I started my walk I arrived home with lots of photos, a slight sun burn and one set of aching feet.
The Song Of The Day - Walking by Pocketsize
Posted by Just Jon at 10:23 PM