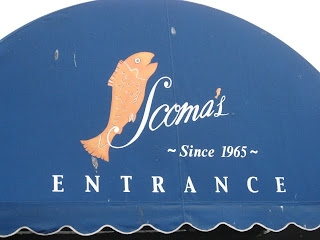 Last weekend I had the pleasure of enjoying a wonderful meal with family. My godmother Joanne, her husband Mike, and daughter Jacqueline were moving Jacqueline back to the Bay area for art school.
As an added bonus Joanne's cousin Lorenza and her husband Marco from Italy came along to help with the move and then enjoy a few days in the City. 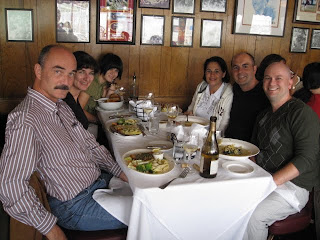 On Saturday I was able to join them at Scoma's Restaurant at Fisherman's Wharf. Joanne had called the week before to see if I would be able to go to dinner and had said that they would like to go to Scoma's.
I had never heard of Scoma's, but since that initial call, Scoma's seems to keep popping up everywhere I go. Scoma's was established in 1965 and is allegedly the most popular fish restaurant in San Francisco. That last bit of information I learned the other day when I saw an advertisement for the restaurant on the F Line Trolley.
After my call with Joanne I went on the Internet so I could look at Scoma's menu and to find out where it was located. The menu is predominately fish and pasta but there are some beef dishes.
Later that afternoon I happened to be walking down at Fisherman's Wharf and looked up at the right moment to see a sign that said "Scoma's." This restaurant had its own alleyway. For all the times that I had walked along this street I did not even realize that there was a restaurant tucked back amongst the boats at the wharf. 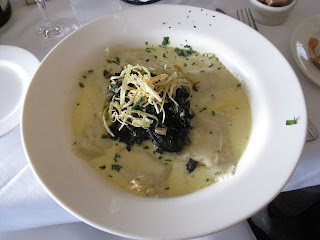 When Saturday finally rolled around Joanne suggested we try for an early dinner as Scoma's does not take reservations. We met at 4pm and the restaurant was already 75% full.
I ordered the Crab Ravioli. The house-made Ravioli came with Champagne Beurre Blanc, Swiss Chard and Fried Leeks. I will be honest, I don't even know what half those things are. The dish, which is pictured above, was beyond decadent. The crab combined with the sauce was buttery rich! 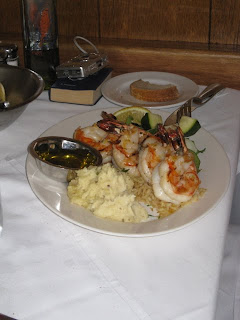 Everyone enjoyed their meal. What made the evening even more special was that it was already paid for by my cousin Joe in Virginia. Several times throughout the meal we raised our glasses of wine to toast Joe for being so generous and buying this dinner from the other side of the country. 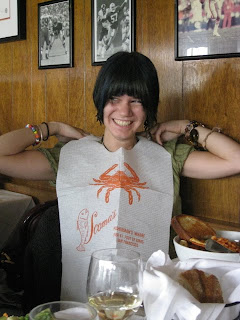 By the time we left the restaurant the waiting area, bar and entrance were full of patrons waiting for their turn to enjoy a meal of fresh fish.
The Song Of The Day - Too Much Food by Jason Mraz
Posted by Just Jon at 10:37 AM