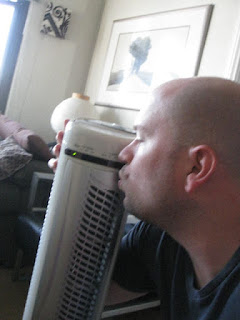 Way to go San Francisco! You went three whole days with temperatures above 75 degrees and no fog.
On day two of the mini heat wave you broke 82 degrees and everyone cheered!
"Yeah for summer!" was the common message on Twitter and Facebook.
When nightfall came it became clear that getting a good nights sleep was going to be virtually impossible since most of the City's housing does not have air conditioning.
Day three of the "heat wave" broke 90 degrees. Twitter and Facebook were now filled with tweets about make shift air conditioning ( a bowl of ice in front of a fan) and wishes for the fog to come back.
I had to dig my Mystic oscillating fan out of the back of the closet. Old "Mysti" became my new best friend.
One couple from a nearby apartment complex opted to take their air mattress up to the roof of their building in an attempt to get some sleep under the night sky. 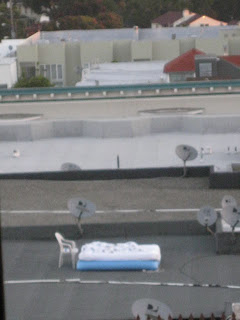 Here we San Franciscans had been begging and praying for Summer to come, and three days into it we were complaining! How did I ever manage to live for 19 years in the San Fernando Valley?
Have no fear Loyal Readers! By day four of the mini heat wave, the afternoon sun gave way to grey fog rolling in off the Pacific Ocean. By 7 PM I needed a sweater. By 8 PM I had to close the window.
Summer San Francisco style had returned!
The Song Of The Day - Hot In Herre by Tiga
Posted by Just Jon at 11:45 PM