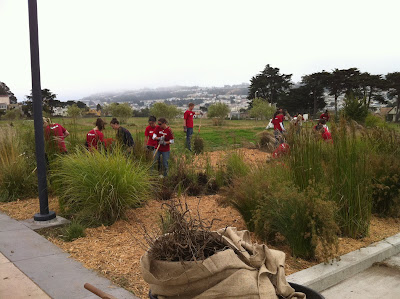 "Every group needs to grab a hoe!"
That was the first command given at Gap's Annual Day In Action.
This year the Inventory Management team traveled to the Minnie & Lovie Ward Recreation Center in Ocean View to help weed the park's entry flower beds.
When our bus first arrived at the recreation center I looked out the window and thought, "This place looks nice already. What are we going to do?"
Once immersed in the flower beds it was clear the original design of the garden was hidden beneath the large over growth.
The center only has one full time gardener for the entire property which includes baseball fields, soccer fields, a gym and playground. So the work that our team was able to do in just a few short hours was much appreciated.
The center's manager appeared to get choked up as she thanked us for our hard work. She said that most of the time she receives complaints about the weeds and trash and that the community will be so thankful for what we had done.
The entire time we were in the park there was a substantial police presence. A constant circle of police cars, SUV's, motorcycle cops, and undercover detectives. Eventually one of the motorcycle officers stopped by our group. One of my co-workers commented on the continuous police presence. The officer informed us that the day before there had been a homicide down the block from where we were working.
Yikes!
As we boarded the buses to go back to the office everyone was pretty dirty, a little sore, but feeling good about the work we had done.
The Song Of The Day - The Garden by Mirah
Posted by Just Jon at 8:56 AM