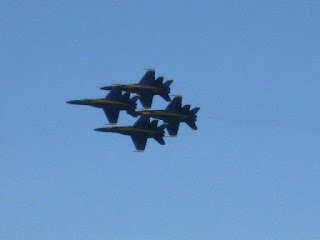 Saturday Oct. 9, 2010 was the first day of the San Francisco Fleet Week Air Show.
As this is the fourth year that I have seen the show I can report that it is literally the same show every year. 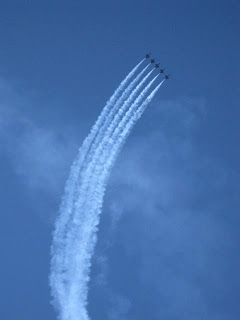 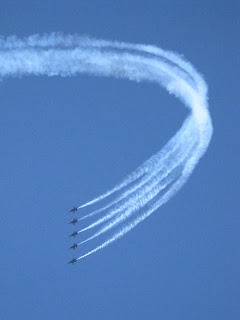 This past August I had received a notice alerting me that they were going to be painting my apartment building and that the project should take about a month and a half.  My first thought was, "Well, they better be done by fleet week because I don't want my million dollar view obstructed."
Two months into the project and it is only half way done!
Typical Just Jon luck would have it that I arrived home on Friday evening to discover that the painters had reached my side of the building and had covered over some of my windows with opaque plastic and black sheer cloth!
Seriously?  Seriously!  You couldn't have waited until Monday to start my corner of the building?
We had also received notices that stated we were not to go on the roof to watch the air show.  (I have broken that rule every year.)
I decided this year I would not break the rules. (See Megan, when you scolded Uncle Just Jon for this infraction two years ago he did learn his lesson.)  I put on my shoes and walked the three blocks to the water's edge to view the show from sea level.  I thought this would give me a whole new perspective.
Turns out it's really not that different from being six stories up. 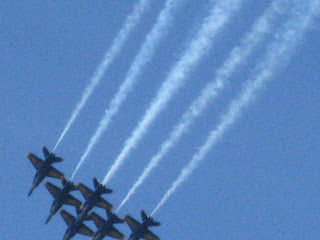 The highlight of the show this year was right after the Blue Angels did the above formation.

In what can only be described as a divine act, four birds took to the sky as if to mock the Blue Angels!

"Big whoop we can do that too, and with zero carbon footprint bizatches!" 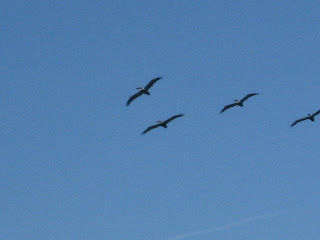 I am not kidding when I say that the crowd erupted into thunderous applause cheering on the four birds!
It was awesome!
Here is a brief video of some of the Blue Angel's passes over the Bay.
The Song Of The Day - Looking For An Angel by Kylie Minogue
Posted by Just Jon at 12:26 AM