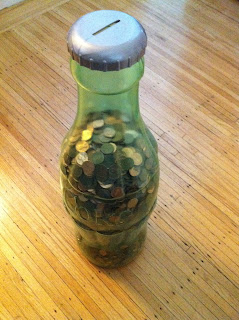 In 1990 my mother gave me the above Coca-Cola plastic piggy bank.  I vowed to only put pennies into this bank.

Over the years the bank has moved from home to home to apartment to apartment from So Cal to Nor Cal.  As the years have gone by the pennies became to much for the aging plastic to contain and cracks started to form.  Packing tape was strategically placed over the cracks in hopes of keeping the bank in one piece until it was filled to the top.

Recently it was clear that the bank was not going to make it much longer.

So yesterday I decided to cash in.

I looked up where the nearest Coinstar was located.  I also knew that I had about as close of a parking space as I was going to get to my apartment if I was going to attempt to move this bank.

Unfortunately the bank was so heavy I could barely move it.

So I made the strategic decision to empty the bank into two nondescript reusable shopping bags. 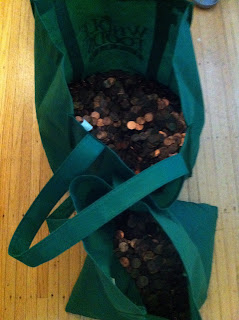 Despite being separated into two bags I could still barely lift the pennies.  This was going to require the use of my "granny cart" if I was going to make it to my car. 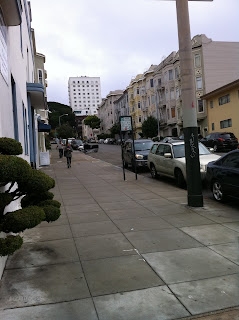 I got the granny cart filled with pennies to the corner and realized for the first time just how steep the hill my car was parked on top of was. 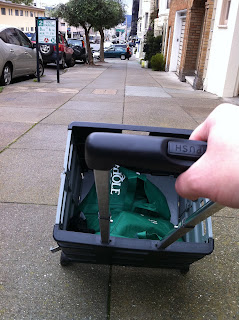 Halfway up the hill I was sweating and out of breath!  The pennies were ridiculously heavy! 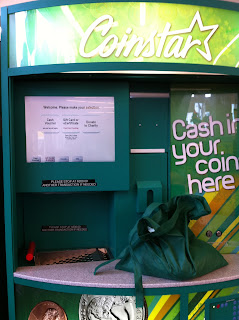 When I reached the market with the Coinstar I popped the trunk open and took the first bag of pennies out.  The strap on the bag immediately ripped and the bag of pennies went splat onto the rain soaked asphalt.  I lifted the bag from the bottom this time and waddled into the store. 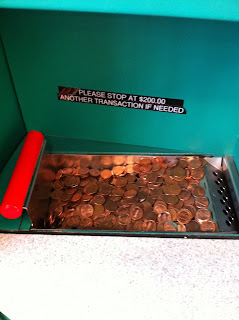 This was my first time using a Coinstar and I was mortified at how much noise these machines make.   Especially since I knew that I was going to have to do this process twice!
Slowly but surely I put handful after handful of pennies into the tray and fed them into the tiny slot.
As I loaded the pennies into the tray I thought back to 1991 high school chemistry class with Mrs. Reeves where we did an experiment that changed the color of pennies to "gold."   Deep inside me that was the only penny I kind of wanted to keep.  But that would be like finding a needle in a haystack to recover one penny. 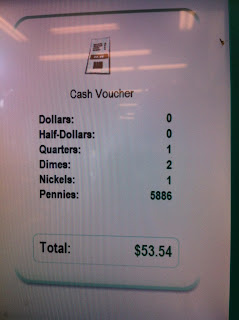 The first bag finished processing and was a total of 5,886 pennies!   That was $53.54 after the service charge was deducted!  Pretty cool because this was the smaller one of my two grocery bags of pennies!

I went out to the car and carefully picked up the second bag of pennies from the bottom and again waddled my way into the store to start the process over.

About halfway through counting the second bag of pennies a miracle happened! 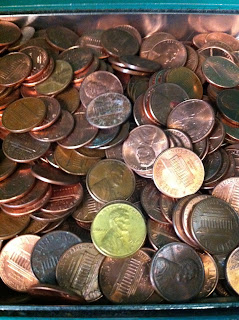 Glistening like the north star in the tray of pennies to be processed was my "Gold" penny from high school!
Hooray! 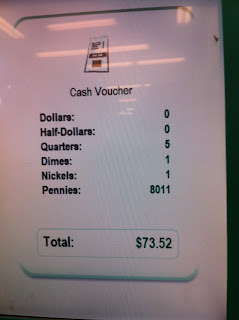 The second bag finished counting and totaled up to a whopping $73.52!

The funniest part was when I went to the cashier to redeem my Coinstar vouchers.  I didn't even think about the chance that I would be given pennies back.  As the cashier redeemed the first voucher for $53.54 I heard the change dispenser go clink clink clink.  I looked down and saw four Abraham Lincoln's looking at me!  How ironic that I just gave away almost 14 thousand pennies to get four back!  That is just a cruel joke!

The Song Of The Day - Money Honey by Lady Gaga
Posted by Just Jon at 11:50 AM

Email ThisBlogThis!Share to TwitterShare to FacebookShare to Pinterest
Tag: Dumb