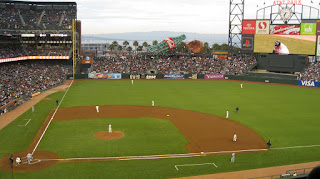 Tuesday this week I happened to be in the right place at the right time.  I had the pleasure of being offered the chance to attend a Giants game with some very important people from work.
Our seats were in the Company box right along the first base line.
Sure, The Giants lost, but I don't think anyone was really shocked by that.
My one co-worker was surprised when I mumbled under by breath at one point, "Oh they walked him."  I think he had zero confidence in my knowledge of the game.  He looked at me and said, "Good, Jon."
Later in game my director said, "Jon, I didn't know you were so into baseball."  I replied, "I'm not."  But for my father and brother's sake I had better live this moment, because I know they would have really enjoyed it. 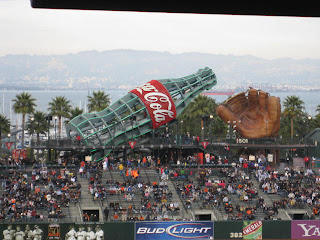 On a side note, in case you were not aware, above the bleachers in the outfield is a giant Coca-Cola bottle.  Get it, "GIANT" Coca-Cola bottle at the Giants game.  Anyway, inside the Coke bottle there are slides like at a playground.  Last summer when I went to a game I did go on the slides.  They are lots of fun, even for grown ups.
Below are a couple more shots I took at the game. 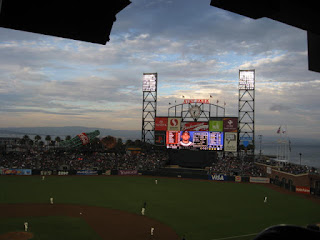 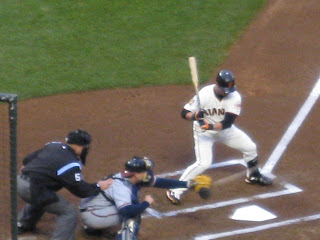