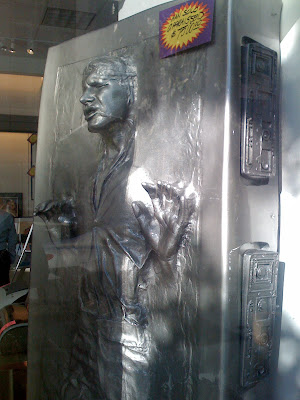 A long time ago in a galaxy far far away...
It was a period of economic unrest.  Retail stores selling the American dream in the form of excessive displays of opulence and wealth had fallen on hard times.
In their battle to stay operating, The Sharper Image filed chapter 11 bankruptcy protection. Forced to take action, they began to shut down the under performing stores.  Next, they triggered the liquidation of all company assets down to the last three hole punch.
It was here that I came across the Jedi Master Yoda protecting Han Solo who was still frozen in carbonite.  I knew that Yoda had obviously thwarted Boba Fett's attempt to return Solo to Jabba The Hut.
Using his Jedi mind tricks, Yoda waved his hand in front of me as if to say "You do not need anything in this store."  And with that I continued on my way.
This blog entry is for my nephew Sean who can beat me in Star Wars Trivial Pursuit. 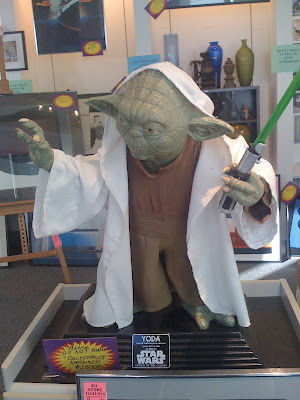 The Song Of The Day - Cantina Band by Figrin D'an & The Modal Nodes
Posted by Just Jon at 9:35 PM