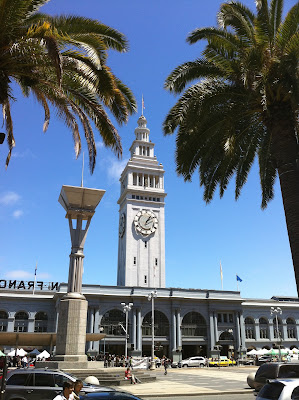 I walk with my head down.
Mostly because I don't want to step in dog poop.
That being said, walking with my head down has allowed me to notice some cool things in this City.
The following "head down" discovery is one of my favorites.
In 1989 the city of San Francisco experienced a 6.9 magnitude earthquake.  One of the casualties of the earthquake was California State Route 480 or the Embarcadero Freeway.
The Embarcadero Freeway was an elevated structure that ran along the waterfront.
Imagine the beauty that is the waterfront today was once blocked by a freeway.
Just in front of the Ferry Building, in the plaza on the Embarcadero, there are two bronze grid outlines embedded in the ground.   Within each outline there is a plaque.

Around each plaque the following message is en scribed:


"The Dashed Line That Surrounds You Marks The Former Location Of An Embarcadero Freeway Column"
One plaque reads:
"The freeway that brooded over the Embarcadero with all the grace of a double decked prison wall is finally gone.  In its place is a sweep of air, fog, October sunlight, piers, ships, and the silver Bay Bridge, which is 55 years old and still looks modern."  October 7, 1991 - Carl Nolte

The other plaque reads:
"We sit and eat our lunch.
And follow the swing of wrecking balls.
Demolishing the Free-way to Nowhere.
It is hypnotic, absorbing
It is happening
It is possible
To bring light and air and vistas
Back into human experience.
In clouds of dust with satisfying thunks
We sit and eat our lunch.
August 11, 1991 - Anonymous
Loyal Readers, what are your favorite discoveries?
The Song Of The Day - History by Madonna
Posted by Just Jon at 11:39 PM