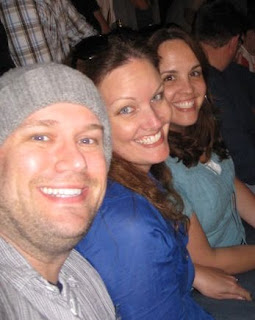 Last night my concert buddies (Loyal Reader Erin and her sister Michelle) and I went to see Ray LaMontagne and David Gray perform at the Greek Theatre on the U.C. Berkeley campus.

It was my intention to drive to the show and meet Erin and Michelle there.  When I arrived at work several co-workers said that they thought it would be easier to take BART (Bay Area Rapid Transit) to the concert.  At the last minute I decided to leave my car at work and try BART.

I arrived in downtown Berkeley with my stadium seat in tow.  After picking up a sandwich at Quiznos I proceeded to walk to the theatre.  Once on the Cal Berkeley campus I couldn't help but be impressed with what a beautiful institution it is.

From the day I graduated college I vowed I had no desire to ever go back to school and get a masters degree.  For the first time on the Berkeley campus I suddenly thought, I could go back to school.  I want to be a Cal Bear.  I could learn the *#@+ out of this place!

By the time my mid-thirties body had hiked up the hill to the theatre my mind had moved well past going back to school and was focused on finding my seat. 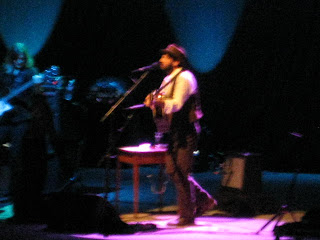 There was an opening act but I have no idea who she was.

For the main show Ray performed first.  If you are unfamiliar with his work I highly recommend you become acquainted with his CD entitled Trouble.  Loyal readers may recall that "Trouble" was my #4 Desert Island Disc.

I can only describe Ray's voice as "BUTTER!"  He is the male version of Sara McLachlan.  Ray comes across as shy and humble.  He spoke very few words to the audience.  In fact other than the part where he introduced the band, Erin counted that he only said eight words the whole night.

Before a song would start he would say, "One, two, three, four,"

and after a song would finish he would say, "Thank you.  Thank you very much."

I am all for artist conversations with the audience, but in this instance I would just have to sit back and enjoy a true artist who can sing and play guitar live with no gimmicks.


After Ray performed there was a brief intermission and then David Gray came out.

I will be honest, I was there to see Ray and really only knew one David Gray song, Babylon.  (Erin and Michelle were the David fans in our trio.) 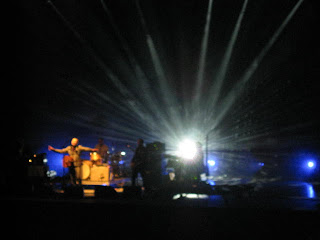 In stark contrast to Ray's low key performance, David is a virtual bobble head of bouncy energy on stage.   I don't think his head ever stopped moving.

David's portion of the show was very engaging and despite not knowing his body of work I was drawn into his performance.

For the finale Ray joined David on stage for a duet.  In my opinion they could drop the duet from the concert because it wasn't that great.

On a side note for all the Generation Xer's out there; before the show started Michelle pointed out the women sitting across from us looked like Tabitha Soren, the former MTV VJ from the early 90s.  I didn't think it was her, but we did refer to her as Tabitha several times in conversation.

Today I looked Tabitha Soren up on the Internet to see what happened to her.

Guess what?  She now goes by the name Tabitha Lee Lewis and lives in Berkeley, CA with her children and husband Michael who wrote the book The Blind Side.

After the show the crowd of people began working their way out of the outdoor theatre.  I followed a group back through the Berkeley campus to the BART station.

There were two flaws to my master transportation plan:

The first train that pulled into the station said "Fremont."

Well I knew I didn't want to go to Fremont.  I wanted something that would go to the other side of the Bay.

Erin called my cell to make sure I had made it to the BART station right as I was trying to decide what to do.

Everyone in the crowded station was piling into the Fremont bound train.

"Should I be getting on this train too?"

I told Erin I needed to go because I had to figure out what to do.  As I ended the call with Erin the doors on the train closed and I was left standing alone on the platform.

Uh oh, I suddenly had a bad feeling.

Ummm, that information would have been really helpful about two minutes ago!

I looked up at the monitor to see when the next Fremont bound train was coming.

Slowly the station began to fill up with more people who had just left the concert so I was no longer alone.

The Fremont train finally arrived and I hopped on board.  Within a few minutes we were to the MacArthur Station and fortunately a Millbrae bound train pulled in at the same time.

Like Cinderella watching the clock tick toward midnight I was happy to have made it onto a train back into the City before service ended for the night.

When we reached the City I decided it would be easier to catch a bus to my apartment rather than walk back to work to pick up my car.

In the end, I am not sure that time and stress involved with taking BART to the concert out weighed the cost savings of parking fees at U.C. Berkeley and the Bay Bridge Toll.

At least now I know for the future, when given the opportunity, GET ON THE FREMONT TRAIN!

The Song Of The Day - Like Rock & Roll And Radio by Ray LaMontagne
Posted by Just Jon at 1:56 AM