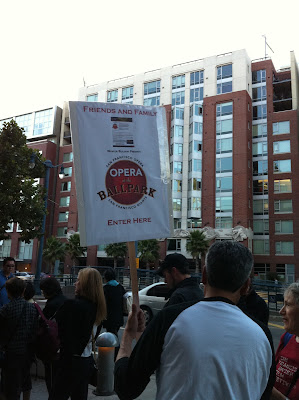 Friday night was the fifth FREE live simulcast of the San Francisco Opera from the War Memorial Opera House into AT&T Park.

The event continues to gain in popularity drawing a record 32,000 people on Friday to watch Verdi's Aida. 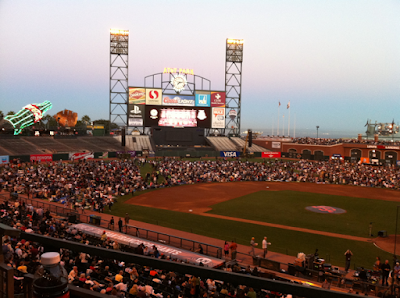 Loyal Readers may recall that last year my friend An and I went to see Tosca in the ballpark.  I found Aida much more enjoyable.  Aida included a chorus, dancing, gymnastics, and beautiful costumes. 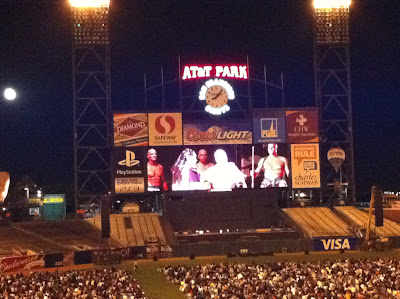 The show started with an announcement by the general director of the San Francisco Opera, "As a reminder, patrons inside the War Memorial Opera House please silence your cell phones at this time.  You people in the ballpark; do what you want!  Play Opera!"

For those not familiar with the story of Aida.  I will give you the one sentence modern day version of the plot - "He's Just Not That Into You." 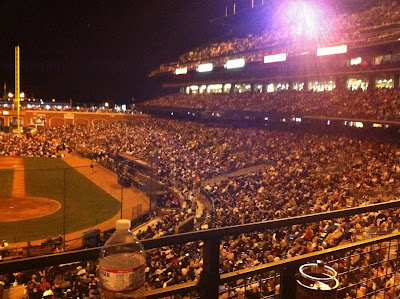 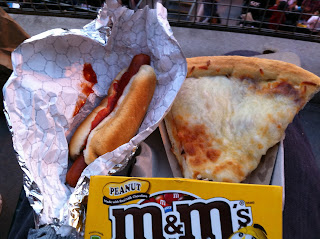 The benefit of going to an Opera at a baseball stadium is that you get to eat ballpark food! 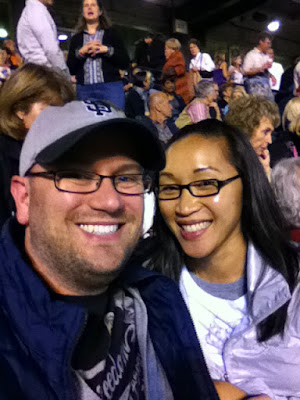 During the intermission a cast member from the City's long running political satire show Beach Blanket Babylon came out to the pitcher's mound and lead the crowd in a rousing rendition of "Take Me Out To The Opera." 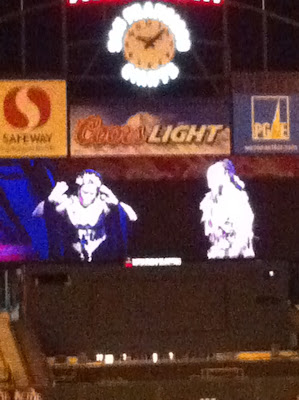 The highlight of the evening came in the last seven minutes of the performance.
A young couple in the row behind An and I began rustling in their seats.  They were trying to find something that had dropped onto the ground.  Considering there was a show going on, they were fairly quiet and I didn't think they were really disturbing anyone.
I was wrong.  Opera fans are crazy.
An older woman who earlier in the evening had pushed her way into the seats next to An and I turned around and told the man to sit down and be quiet.
That was when all hell broke loose.
The man responded back, "I think if you lost a $50,000 ring you would be up looking for it too."
The old lady did not seem to care about the $50,000 ring, she was more concerned about the dying Aida and Radames on the jumbo tron out in center field.  "Sit down and be quiet," she said again.
Just to be clear.  The young man and woman looking for the ring were not blocking the older woman's view as they were behind her and not even directly behind her, they were at the end of the row.
The man said back to the older lady, "Shut your mouth bitter old lady!"
At this point I turned to An and said, "We are not leaving this stadium until that ring is found!"
The young woman tried to calm the young man down while apologizing for the disturbance.
I mean really, this was a free event in a baseball stadium, did the old lady think it was going to be as quiet as a theatre?
As the show ended and people started to clear out there was more room to look for the ring.
Eventually another man spotted the ring stuck in the hinge of the seat in front of the young woman.
When the ring was freed from the seat and safely back on the young woman's finger a round of applause was given.
The Song Of The Day - Aida: O Terra, Addio; Addio Valle Di Pianti - Aida Soundtrack
Posted by Just Jon at 9:01 AM