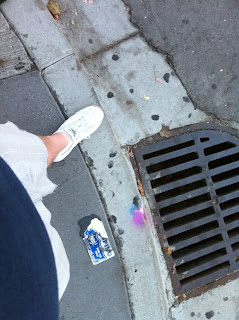 Street tacos seem to be all the rage the last few years.
These little mini tacos are usually made with some form of meat piled high on two tiny stacked tortillas.
Leave it to me to discover the next trend - "Street Burritos."
I discovered Street Burritos by accident really.
You see Loyal Readers, I had eaten a late breakfast that was so filling I skipped lunch and was not really hungry for dinner.  Then by eight o'clock I suddenly had the cravings for a burrito.
I threw on my sweatshirt and started walking to Nick's Crispy Tacos on Polk Street.
I ordered the Pollo Burrito.
When the server handed me my "To Go" bag I was surprised that my burrito weighed about as much as a brick.
I started my walk home and was about a block away from my apartment when the bag ripped and my burrito when kurplunk onto the street below.
As I looked at my giant burrito laying in the middle of the street I immediately thought of the three second rule.
"Pick it up,  pick it up,  pick it up!" I said to myself.
My brief inspection in the dark left me hopeful.
It looked like the two layers of aluminum foil had kept the burrito protected.
When I reached my apartment I took a closer look.
Was my burrito going to be edible?
The first layer of the foil was covered in gravel.
As I slowly peeled the first layer back the second layer was clean.
Thank you Jesus!   (Not the man upstairs, the worker at the taco place who double layered the foil!)
The Song Of The Day - Out In The Streets by Blondie
Posted by Just Jon at 11:27 PM